Lafreniere Park was established in a community that has thousands of public minded citizens who have shown a responsibility for public service and commitment to improve the quality of life of Jefferson Parish. Not only has the park been used as a model for other public improvements throughout Jefferson Parish but it has become a source of pride and shall stand as a living monument to a community that had the vision to provide this jewel for its residents and generations to come.

At the time of the cession of the province by France to Spain, LaFreniere became a most heroic figure in organizing a revolt against Spanish rule in 1768 and was executed for his part in the conspiracy on October 25, 1769. Upon the death of his father, the plantation passed into the hands of Nicolas Chauvin de la Freniere, Jr., later to be Louisiana’s Attorney General. On part of this 5000 acre land grant, the Jefferson Downs racetrack was eventually built. The racetrack operated until 1965 when Hurricane Betsy devastated the area. The track was rebuilt in a different location, thus leaving the site vacant, and the dream of a park for Jefferson Parish was born. The park on the old Jefferson Downs site was named Lafreniere Park, so that the historical significance of the land would not be forgotten.

After the destruction of the Jefferson Downs Race Track by Hurricane Betsy in 1965, the only undeveloped site suitable for such a park became available. The 155 acre site is centrally located in East Jefferson Parish. Fortunately, the owners of the storm-ruined race track decided to relocate and sell the land, and they held it for possible purchase by the citizens of Jefferson Parish.

Citizen’s support for the park was widespread, and in September, 1972 the Lafreniere Park Citizens Committee presented the signatures of over 12,000 people who favored the purchase of the site for a park. Based on this impetus and additional citizen support, the local bond issue was proposed, and local officials started to apply for matching Federal Funds. A special bond election was called for February of 1973, and interested citizens began an intensive person-to-person campaign to vote for the park.

Construction started on Lafreniere Park in 1977, and the park was substantially finished and dedicated in 1982. Today the people of Jefferson Parish have enjoyed the park for over twenty-four years, and the park’s master plan has been able to stand the test of time. Although some elements of the original master plan were never constructed, the overall design concept is a success. Jefferson Parish residents will have a beautiful and functional park for years to come. 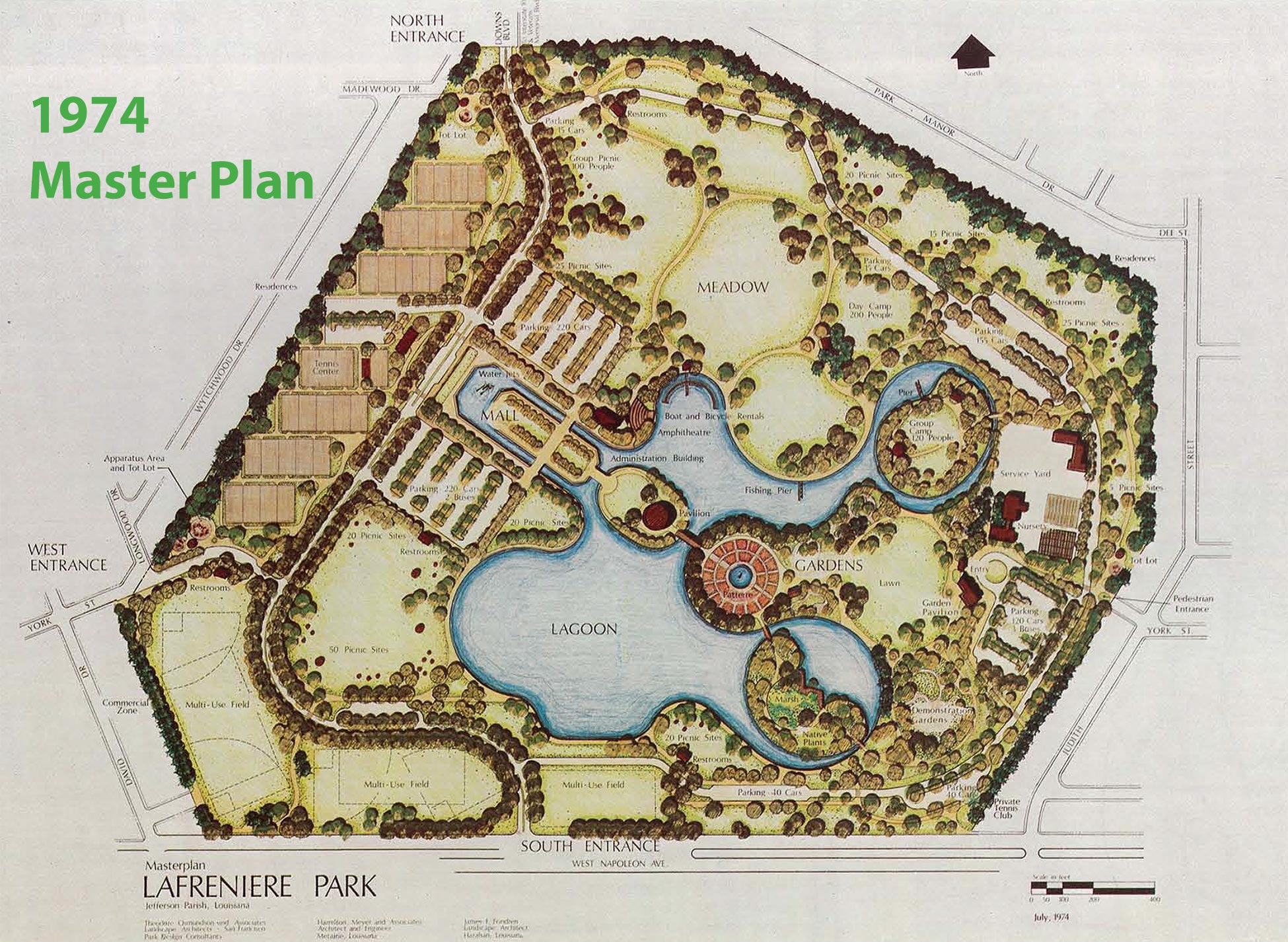 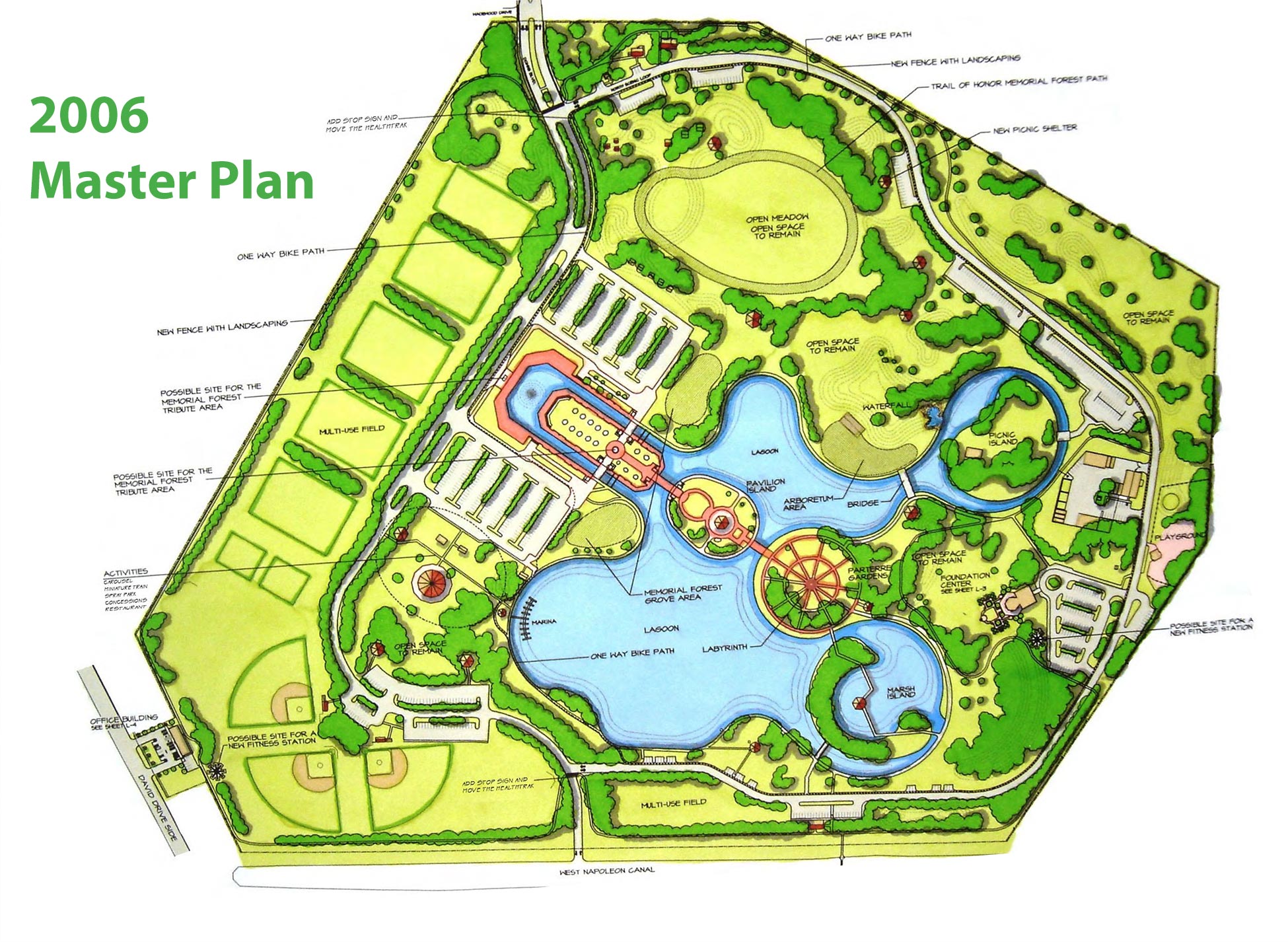 View of the Lagoon during original construction-circa 1978 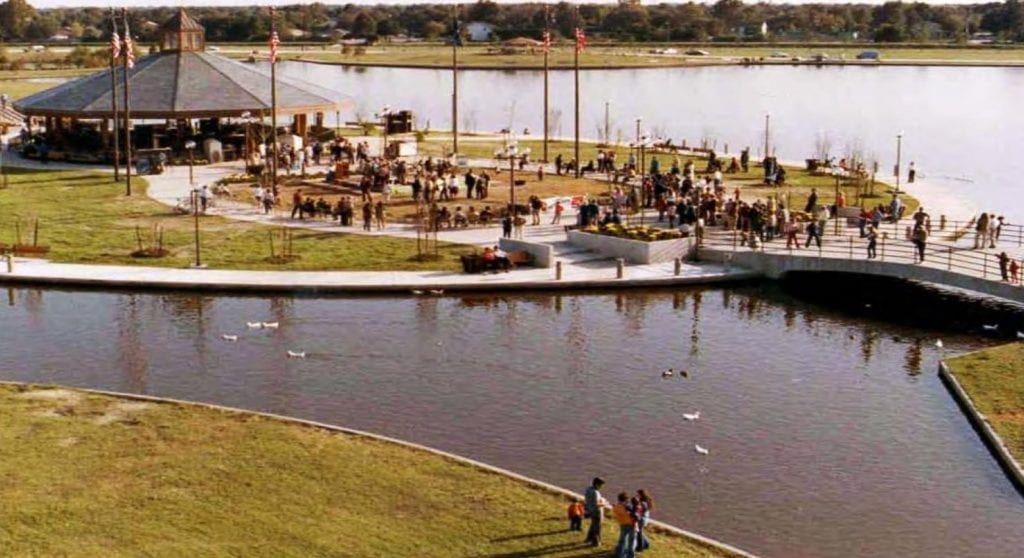 The Advisory Board, directly accountable to the Parish’s governing authority, was formed to guide the development of Lafreniere Park in accordance with its master plan. With little funding in place to accomplish this monumental task, the Board established the Lafreniere Park Foundation to cultivate the public’s acceptance of the Park, its value to the community and to seek funds from all avenues for capital improvements. The efforts of the Foundation and its volunteers, evident years later, have had a profound impact on the Park.

Established on September 23rd, 1980, the Foundation worked in tandem with the Advisory Board for approximately 15 years. Its basic objective was to secure capital to improve the Park. The Foundation, with the help of a pool of volunteers willing to help generate revenue, raised more than one million dollars. These efforts resulted in funds that provided for the construction of several major projects within the Park and involved over eight hundred residents as well as numerous companies, philanthropic individuals and non-profit agencies.

In summary, the Foundation provided funds and a broad base of public support, both financial and personal, for the Park’s development.

At the turn of the ninth decade of the 20th century, five members of Lafreniere Park’s Advisory Board came together and formulated a plan to seek non-traditional sources of revenue for the further funding of the development of Lafreniere Park and construction of its amenities.

This group developed a resource and activity base with the establishment of a tax exempt, non-profit corporation that would actively seek out and encourage private sector donations. Their efforts resulted in the Lafreniere Park Foundation to whom the Advisory Board would present projects for funding not otherwise funded by local revenue.

Accomplished by outlining, in broad terms, the goals of the Foundation, the charter and by-laws were prepared by this core group and referred to the Advisory Board for review along with a recommendation of the Foundation Board’s charter members. Seven of the eleven Charter Board of Directors were also members of the Advisory Board, two were past members of the Parish Council and the final member was a current Councilman who district encompassed the Park.

The Foundation moved forward to seek local business and civic leaders interested in becoming members of its Board of Directors and the manager of the Park was drafted to serve as a consultant. This insured not only the Park’s staff support for the initial operation in the short and long range plans and operation of the Foundation but also the involvement of the Parish government.

The legal requirements for the establishment of the Foundation required approximately nine months for completion. These included the chartering of the corporation, registering the corporation with the Louisiana Secretary of State, the designation of principal officers and agents, preparation of an initial budget and, most importantly, submission of an application to the Internal Revenue Service to achieve tax exempt status under IRS Code Section 501(c)(3). This section of the tax code provided that all funds donated to the Foundation would be tax deductible.

Funding to start operation of the Foundation was initiated by the Parish with $6,000 along with staff assistance, office space and other similar resources. The Louisiana Legislature provided another $10,000. The Foundation had its “seed money” to begin fund raising efforts.

Generating interest to develop public financial and individual physical resources necessary to assist with the fund raising efforts of the Foundation was accomplished by utilizing voluntary participation of prominent members of the community with high name recognition. This campaign was successful and the structure of the Foundation expanded from a narrow objective of fund raising for capital improvements to a broad objective of generating public support and cultivating a pool of volunteers.

A public relations committee was formed to design and develop those items necessary for implementation of the charter of the Foundation including a brochure describing the Park, methods of participation, a gift catalog outlining future major projects, a slide and sound show and a media campaign that included the Park’s first major project.

The gift catalog, distributed to individuals, groups, organizations and corporations, outlined the different needs of the Park which were as varied as the needs of the community. A brochure was printed and sent to citizens and civic groups in the Parish and, when possible, a slide and sound production was used to make presentations to all those interested in the development of the Park. Cash gifts, volunteer time and labor to help with the construction of public shelters, trash collection, wildlife habitat management and other areas of involvement were encouraged.

These efforts created positive support on all levels and caused not only an awareness of public need but also the delivery of these services.
The Committee spent countless hours in developing these sales tools that were used to achieve its objective: to present the Park, its development and its need to the community. Not only used for fund raising, these presentations were also used to enlist members of the Friends of Lafreniere Park and to develop necessary public information and positive media attention in connection with the activities of the Foundation. Touting its main purpose, the Foundation set out to deliver its message that fund raising was necessary on many levels, not only to aid in the development of Lafreniere Park but also to subsidize capital improvements that has helped to make the Park the remarkable place that it is today.

The Foundation planned, operated and managed the first membership drive for the Friends of Lafreniere Park established on July 25th, 1981. Over 600 members joined the Friends’ ranks and this group helped to develop the broad base of community support that the Park still enjoys.
The Foundation then established the Philanthropic Committee that was charged with seeking out businesses and individuals who would be willing to make donations in excess of $5,000.

The Foundation finally formed the Recognition Committee to recognize those individuals and groups that made donations to the Foundation which became one of the more important aspects of securing significant donations, either in terms of the amount of a particular donation or in numbers of donations from specific campaigns.

The Foundation sponsored a number of programs that included not only fund raising events but also the initial programs of increasing membership for the Friends of Lafreniere Park and donations from clubs and organizations.

It provided its own revenues by hosting such events as “Cotillion in the Pavilion.” This black tie event helped fund such projects as the Park’s waterfall, marina, playgrounds, shelters, landscaping and a concession facility. Funds raised by the Foundation were also used to build the Carousel in the Park.

The Foundation coordinated the development of the Park’s Foundation Center with the Advisory Board and Parish and introduced “Christmas Lights in the Park,” a seasonal activity that has grown into the light display still shown annually during the holiday season. Other activities such as special events for arts, crafts, music, band concerts and an annual Labor Day concert by the New Orleans Symphony helped to raise funds and helped to promote positive publicity and improved public relations.

THE OUTCOME OF ITS EFFORTS

The Foundation’s goal for the first year of operation was set at $50,000 and a roster of 300 Friends members. Its goal for the second year was $100,000 and double the membership.

The Foundation not only met its goal but the success of its campaign was evident by the additional $450,000 in cash and pledges that it raised and the 600 members that joined the Friends, all in the first year of operation.

The Foundation’s success can be measured by a drive through the Park, a reception or business meeting in the Foundation Center, a walk around the lagoon, a picnic at a shelter or watching the children play at the different recreational areas offered throughout the park.

Without the efforts of the Foundation and its volunteers, the Park would be acres of land with few of the venues the general public has come to enjoy. The Park may never have become the place that the community looks to for a few hours of relaxation or as a retreat back to nature right in its own backyard

Where the Foundation left off, the Patrons of Lafreniere Park have picked up. Established on November 7th, 1996, the Patrons are a group of prominent civic leaders and community activists who support the Park and continue to strive to meet the challenges of formulating additional ways to fund raise for the Park’s ongoing development.